Students from Smarter Travel Campus Third Level Partners throughout the country received awards for creating videos, animations, audio pieces, radio ads, graphics and installations for the National Transport Authority’s Smarter Travel Student Multimedia Awards in the Belltable Theatre, recently. The entries produced by students were to promote ‘smarter’ modes of transport; particularly walking, cycling, public transport and car sharing.   “We are delighted with the quality and variety of entries, and our judges were equally impressed.  The entries were both entertaining, and captured the positive aspects of making smart transport choices for the journey to college“.  Anne Graham, Chief Executive Officer, National Transport Authority. 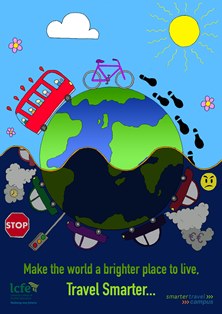